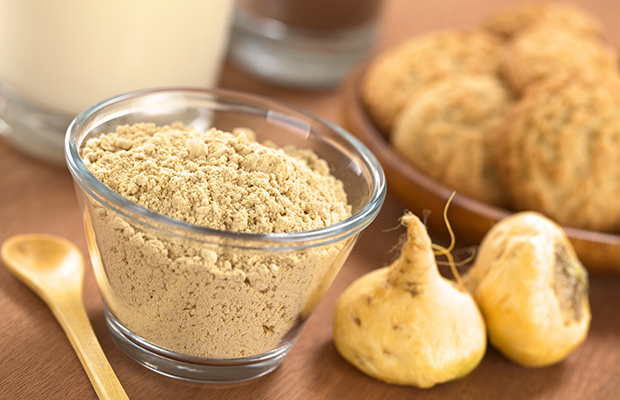 Posted at 14:49h in Sin categoría by IntiNetwork

You may have noticed a new superfood in the aisles of your health food store or on the menu of your local smoothie bar. Hanging alongside spirulina and chia seeds is an unassuming brown powder—maca.

Not to be confused with matcha, maca is a native Peruvian plant that’s touted as an excellent source of antioxidants, iron, and calcium—and as a powerful hormone regulator, improving everything from PMS and menopause symptoms to your sex drive.

But do claims about this superfood have any roots? Read on to find out.

First things first, maca is a root vegetable that grows high in the mountains of South America. “It looks like a funky-shaped potato,” says Heather Mangieri, R.D. and spokesperson for the Academy of Nutrition and Dietetics. “It’s very difficult to digest in its raw form. In the States, it’s sold as a powder or in a gelatinized version which makes it easier for the body to digest and absorb.”

Most often, maca is added to other foods such as smoothies or energy bars, where it adds about 20 calories per tablespoon. Taken alone, it has a bitter taste so the cocoa or banana in your favorite acai bowl can help mask the strong flavor.

But maca’s not a new discovery. It has been used medicinally in traditional Peruvian culture for years. According to Mangieri, a 10-gram (roughly two teaspoons) serving of maca has approximately 25 mg of calcium and 28 mg of vitamin C. “Prior studies have demonstrated that maca is abundant in amino acids, phytonutrients, healthy fatty acids, vitamins and minerals,” says Anita Mirchandani, R.D. and spokesperson for the New York State Dietetic Association. But Mirchandani notes that recent data on maca’s nutritional profile is limited.

Many believe that maca’s power lies beyond just nutrition. Most notably, maca’s rise to fame rests on its reputation as a libido enhancer. “Based on prior studies, the relationship between maca and sexual libido and fertility is the strongest,” says Mirchandani. But the evidence is mostly anecdotal and definitely mixed.

“For people who truly believe that this root can increase libido, they’re using it regularly for this specific purpose. Other people who’ve tried it a few times say there’s no effect,” says Mangieri. “It’s not something you take once and have an increased sex drive. They use the product on a regular basis and this is their report of what happened. But there’s no scientific evidence.” Yet. It’s still a new topic of study and researchers are currently investigating how and why maca may make your romps in the bedroom more fun.

More recently, maca has been promoted as a hormone regulator and adaptogen—a substance that helps the body manage and adapt to stress. “Maca’s phytonutrients and flavonoids are one reason it’s said to boost immunity but again, the specifics on how and how much are not clear,” says Mangieri.
Overall, the powerhouse root remains somewhat of a mystery—and claims that it helps ease symptoms of PMS and menopause like cramps, hot flashes and mood swings are largely unsubstantiated. “Unfortunately, there isn’t enough evidence to validate its efficacy on mood, PMS, and menopause,” says Mirchandani. “Most of the claims [about PMS and post-menopausal benefits] are going to come from the nutritional profile of maca and that it has calcium and vitamin C,” says Mangieri.

And maca’s power to boost workout performance and concentration? Some report feeling a boost of energy after consuming maca. “It’s a food that’s going to provide energy and carbohydrates,” says Mangieri. “And in that way, it could add some additional energy.” But again, there’s no concrete evidence.

Should you add maca to your smoothie?

While maca has few known side effects, it’s smart to exercise caution. At two teaspoons, Mangieri says it’s not dangerous or harmful. “But I don’t know if there are dangers to having more than that,” she says.

Although maca does contain vitamins, minerals and antioxidants, the amount contained in a two-teaspoon serving is small. Take calcium for example. The 25 mg of calcium in a typical serving of maca is only a fraction of the 1,200-mg recommended per day for women over 51, according to Mangieri. “Is it the best source of calcium? No. This isn’t a cure-all product,” she says. “There are other foods where you can get the same nutrients but this can be an easy way to add some nutrients to your diet.”

Ultimately, adding maca to your next smoothie may be a nice-to-have addition, but it’s not a miracle supplement. “Taking two teaspoons of maca in your smoothie and then eating crap the rest of the day isn’t going to make you healthier overall,” Mangieri reminds.